Search->Hotels in United Kingdom->Hotels in London->London Hilton On Park Lane->
View all photos in gallery
nights
1 Room With 2 Adults Change Search
Check Rates
Room
Room
Address
22 Park Lane, London, England, W1K 4BE, United Kingdom
Located on prestigious Park Lane in Mayfair, the London Hilton on Park Lane Hotel boasts stunning views of Hyde Park, Knightsbridge and Westminster. With 453 rooms and suites, this award-winning 5-star luxury hotel also has a stylish bar and a Michelin-starred restaurant. With marble bathrooms and a flat-screen TV, some rooms also have balconies. Executive rooms and suites offer Executive Lounge access with complimentary a continental breakfast, snacks and beverages throughout the day as well as internet access and private check-in. Boasting some of London’s finest restaurants and bars, the Michelin starred Galvin at Windows serves a menu with an emphasis on French cuisine. Trader Vic's, London's first Polynesian-inspired restaurant offers a taste of paradise and famed for its 1944 Mai Tai cocktail. The stylish Podium Restaurant and Bar serves seasonal British cuisine and is famed for the Confessions of a Chocoholic afternoon tea. The London Hilton on Park Lane also has a business centre, a steam room, and a sauna. 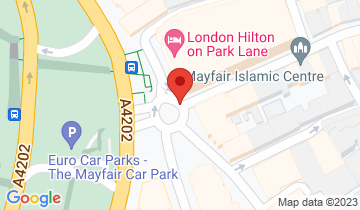 Airports Show all on map » Airports Show all on map »

Art Galleries Show all on map »

Train stations Show all on map »

Historical Buildings Show all on map »

National Parks Show all on map »

Famous Streets Show all on map »

Beaches Show all on map »

Monuments and Landmarks Show all on map »

Shopping Center Show all on map »

Theatres Show all on map »

Other Show all on map »

Some of these cookies are essential, while others help us to improve your experience by providing insights into how the site is being used. For more detailed information on the cookies we use, please check our Privacy Policy.

We use some social sharing plugins, to allow you to share certain pages of our website on social media. These plugins place cookies so that you can correctly view how many times a page has been shared.